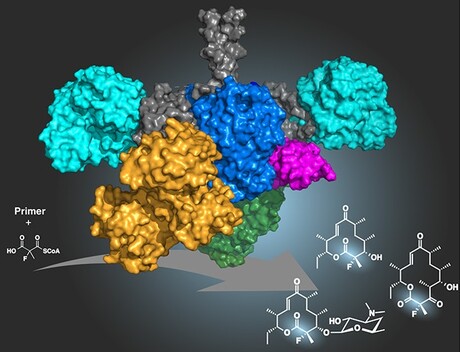 The use of the element fluorine to modify active substances is an important tool in the development of modern drugs. German and American researchers have now succeeded in fluorinating a natural antibiotic via targeted bioengineering – a method by which an entire class of medically relevant natural product substances can be modified. Their work has been published in the journal natural chemistry.

Medicinal active ingredients have been chemically modified with fluoride for decades, due to its many therapeutic effects: fluoride can enhance the binding of the active agent to the target molecule, making it more accessible to the body and altering the time it passes through the body. Almost half of the small molecule drugs (molecules up to ~100 atoms) currently approved by the United States FDA contain at least one chemically bonded fluorine atom, including cholesterol lowering agents, antidepressants, anticancer agents and antibiotics.

Bacteria and fungi often manufacture complex natural compounds to gain a growth advantage. One possible route for the development of drugs from natural compounds is to modify these substances by adding one or more fluorine atoms. In the case of the antibiotic erythromycin, for example, the attached fluorine atom confers significant advantages.

The new erythromycin produced by this process is more easily accessible by the body and more effective against pathogenic microorganisms that have developed resistance to this antibiotic. However, synthetic chemical methods for inserting fluorine into natural substances are very complicated. Due to the necessary chemical and reaction conditions, these methods are often “rough,” said Professor Martin Grininger of Goethe University Frankfurt. “This means, for example, that we are very limited in selecting the positions where the fluorine atom can be attached,” he said.

Grininger and his colleagues have now succeeded in using the biosynthesis of an antibiotic-producing bacterium. In this process, the fluorine atom is incorporated as part of a small substrate during the biological synthesis of a macrolide antibiotic.

“We’re introducing the fluorinated unit during the natural manufacturing process, an approach that’s both efficient and elegant,” Grininger said. “This gives us great flexibility when positioning the fluorine in the natural substance – and allows us to influence its effectiveness.”

To this end, project leaders Dr. Alexander Rittner and Dr. Mirko Joppe – both members of Grininger’s research group – inserted a subunit of an enzyme called fatty acid synthase into the bacterial protein. The enzyme is naturally involved in the biosynthesis of fats and fatty acids in mice. Fatty acid synthase is not very selective in processing precursors, which are also important for making antibiotics in bacteria, Rittner explained. Through clever product design, the team succeeded in integrating a subunit of the murine enzyme into the corresponding biosynthetic process for the antibiotic.

“The exciting part is that with erythromycin we were able to fluoridate a representative of a gigantic class of substances, the so-called polyketides,” Rittner said. “There are around 10,000 known polyketides, many of which are used as natural medicines – for example, as antibiotics, immunosuppressants or anti-cancer drugs. Our new method therefore has enormous potential for the chemical optimization of this group of natural substances in antibiotics, primarily to overcome antibiotic resistance. To harness this potential, Rittner founded the startup kez.biosolutions bring the team’s research results to the applications stage.

“Our technology can be used to generate new antibiotics simply and quickly and now offers ideal touchpoints for projects with industrial partners,” added Joppe.

Grininger has been researching tailored polyketide biosynthesis for several years and said his team’s success in fluoridating macrolide antibiotics was “a breakthrough we’ve worked hard for” as well as a “push for the future.” “.

Image caption: Scientists working at Goethe University Frankfurt have created an enzyme that can produce fluorinated antibiotics through a series of reactions. For clarity, the different regions of the hybrid that interact in this context are represented by different colors. Image credit: Grininger.